Presented in Collaboration with The Forsight Analyis Nexus Initiative (FAN), The Millennium Alliance for Humanity and Biosphere (MAHB), The Resilience Project & The New School at Commonweal.

Dr. Nafeez Mosaddeq Ahmed addressed a framework by which we can understand and respond to the COVID-19 crisis while anticipating its consequences and preparing for what’s next. OMEGA Advisory Board members engaged Dr. Nafeez Ahmed in conversation.

Nafeez is a research fellow at the Schumacher Institute for Sustainable Systems and a fellow at the Royal Society of Arts. The Evening Standard has twice include him on its list of the top 1,000 most influential Londoners.

See our events page for upcoming events and recordings of past webinars. 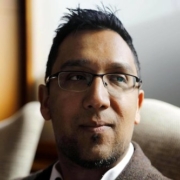 Dr. Ahmed is an award-winning investigative journalist, systems theorist and change strategist. He is ‘system shift’ columnist at VICE where he reports on global system transformation and founding editor of the crowdfunded platform INSURGE-intelligence. He previously reported on the interconnections of global environment, energy and economic crises for The Guardian via his ‘Earth insight’ Guardian blog.

He is the author of A User’s Guide to the Crisis of Civilization (Pluto, 2010), the first peer-reviewed social science study integrating a systems approach to climate, energy, food, economy, war, terror and state-militarisation, and Failing States, Collapsing Systems: BioPhysical Triggers of Political Violence (Springer-Nature, 2017).